I sit in fear, dread and expectation waiting for President Ramaphosa’s face to appear on my laptop screen, whilst I stream the address alongside hundreds of thousands of other South Africans. It’s a strange reality considering I have never, in my lifetime, sat anticipating the words of a South African president.

The unusual and unexpected emotions I’ve been experiencing during the Covid-19 pandemic have been pointed out quite unexpectedly to me as grief. The idea is that as South Africans, and people around the world for that matter, lockdown has led all of us into a state of grief. Grief is described in several different dictionaries as “deep sorrow, especially that caused by someone’s death,” but grief goes much further than that. Grief can be ascribed to almost any circumstance where we experience a sense of loss or even a significant change in circumstance.

I struggled with this explanation at first, sitting in my comfortable suburban home with my fast speed internet where I am able to continue working, thinking I haven’t really experienced any form of loss personally. Yet, as I’ve journeyed through the last few weeks, I’m realising more every day the things that I have lost. I have lost the ability to sit across a dinner table with people who mean something to me. I have lost the ability to wind down at the end of the day, whilst walking the dog in the local park. I’ve lost the freedom of movement, to go where I want, when I want to. I’m not able to encounter the beauty of the Western Cape I’ve become so accustomed to in the last 18 months. Each of these things, although seemingly trivial in many people’s context, are a form of very real loss in my day to day life.

A significant mental shift took place when I was able to compare my current emotions and actions with the times in my life where I did encounter significant loss. For example, in the time surrounding my father’s death I would often find myself wandering around the house, presenting myself to a task, only to realise I had just been standing there blankly for almost 5 minutes, not actually doing anything – it’s that feeling of staring deeply through an open fridge door to ‘look’ inside, even though nothing inside has changed or grabbed your attention.

In the world of Psychology, grief is outlined using 5 stages:

As I’ve read more on the subject, and actively engaged my thinking with this concept during lockdown, I can very clearly, in my simplicity, notice elements of each of these stages.

Denial – “This lockdown story isn’t really going to affect me”

Anger – Expressed in trivial occurrences around the house that normally don’t bug me.

Bargaining – “Surely just taking the dog for a walk won’t do any harm?”

Depression – Experiencing signs of depression like tiredness and forgetfulness.

Acceptance – “Ok, this is what it is, I just need to try to make the most of it.”

I consider myself to be quite a practical person, so amidst my emotions I can’t help but try to find practical steps to not only acknowledge what I’m feeling, but to be proactive in my actions to get through this lockdown. The first thing I’d suggest is reading the free e-book ‘Facing the Future We Didn’t Choose’ by Dr. Tim Tucker, which I found to be immensely helpful. Tim shares his own personal encounter with grief but contextualises it within the current pandemic. With chapters like ‘Survival’ and ‘The New Abnormal’, Tim takes a very practical approach to coping in the context of lockdown, but it is also an approach that can be applied to many other areas of your life.

The second thing, which is always meaningful to me in times of sadness, is assisting those who are experiencing something similar to myself, but who’s needs are greater than mine. As I encounter my grief, I have been made deeply aware of how others are experiencing losses in their own context. A large percentage of our population have lost their income and in that, the ability to provide for their family. The Message Trust SA has taken the practical steps to try provide for these families through a community fund – a donation of as little as R50 can feed someone for a week.

There are many other resources available to help you deal with grief, and I’d like to encourage you to overcome what you are experiencing through some advice I was given when dealing with personal loss:

“Now is not the time to retreat. It’s not the time to withdraw from all that you know to love. It’s the time to try. Try to connect, try to love, try to find some element of normal every day. As long as you are trying, you’ll move forward.”

We love the local church.

One of our values at The Message Trust is local church. We are committed to empowering the local church to become missional and focus on transforming their local communities. Since working at the Message, I have really developed a DEEPER love for God’s church. I have learnt the important role the church plays in setting the moral temperature within the community they’ve been called to serve.

Most of our communities are plagued with unemployment and the consequence of this is an increase in gangsterism and drug use. This in turn leads to further moral degradation. These conditions literally take the “unity” out of community. We have hope though, as there is evidence throughout history that shows God using the local church to help rebuild broken communities and I have no doubt that God will use it again.

I thought I’d share some examples with you, just to stir up hope in your hearts and awaken that love in your heart for God’s church again…

What makes me believe that this prophecy could be true, is the faith of a church in the Nyanga community known as The New Crossroads Baptist Church and is led by Pastor Kwanele Cement. Across Cape Town this name may seem insignificant, but they are making HUGE STRIDES toward seeing that prophecy being fulfilled. In partnership with The Message Trust, a hub has been setup in Nyanga and is being led by one of the church leaders, Mkhululi Letsatsi (MK). This hub supports the community in 3 areas; Education, Sports and Discipleship. They offer after-school lessons to assist young people with literacy and mathematics. Soccer is the language of the township, so soccer programmes have been put in place for young people. Finally, MK and his team are intentional about discipling young men and women through studying the bible together. The result of this is HUGE. We hear testimony after testimony of how these young people are now impacting their families and the greater community.

Another great example of an effective local church is Reconciliation Ministries in Parkwood, led by Pastor Eddie Hendricks. This church oozes love. Pastor Eddie is the kind of guy that walks through the community and is greeted warmly by all the residents. He and his team are very involved in the community and run multiple school and youth programmes. Creative Arts is at the heart of the community, and in partnership with The Message Trust, the church offers a creative arts and anti-gang programme to the youth. In an area filled with gangsterism and drugs, we’ve witnessed young people make better life choices. All they needed was an opportunity to make a better choice, and Reconciliation Ministries has provided that for them.

These stories once again prove that the local church has a vital role to play in the bettering of not only our communities, but our country and furthermore, the world. At The Message, we are committed to seeking the Lord for innovative ways to best support the local church and will continue to do so for as long as we’re able.

Christ Gave Me A New Identity 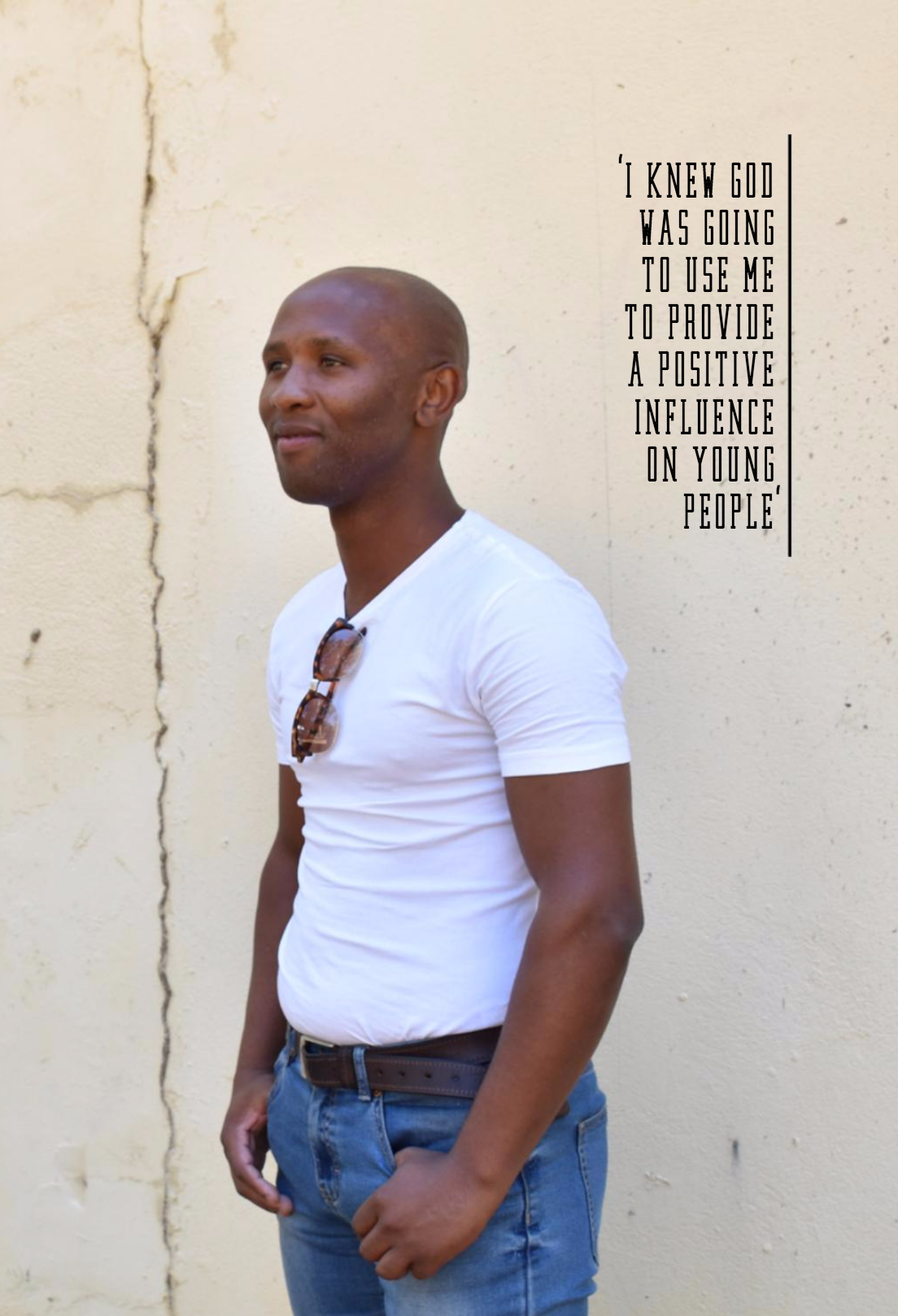 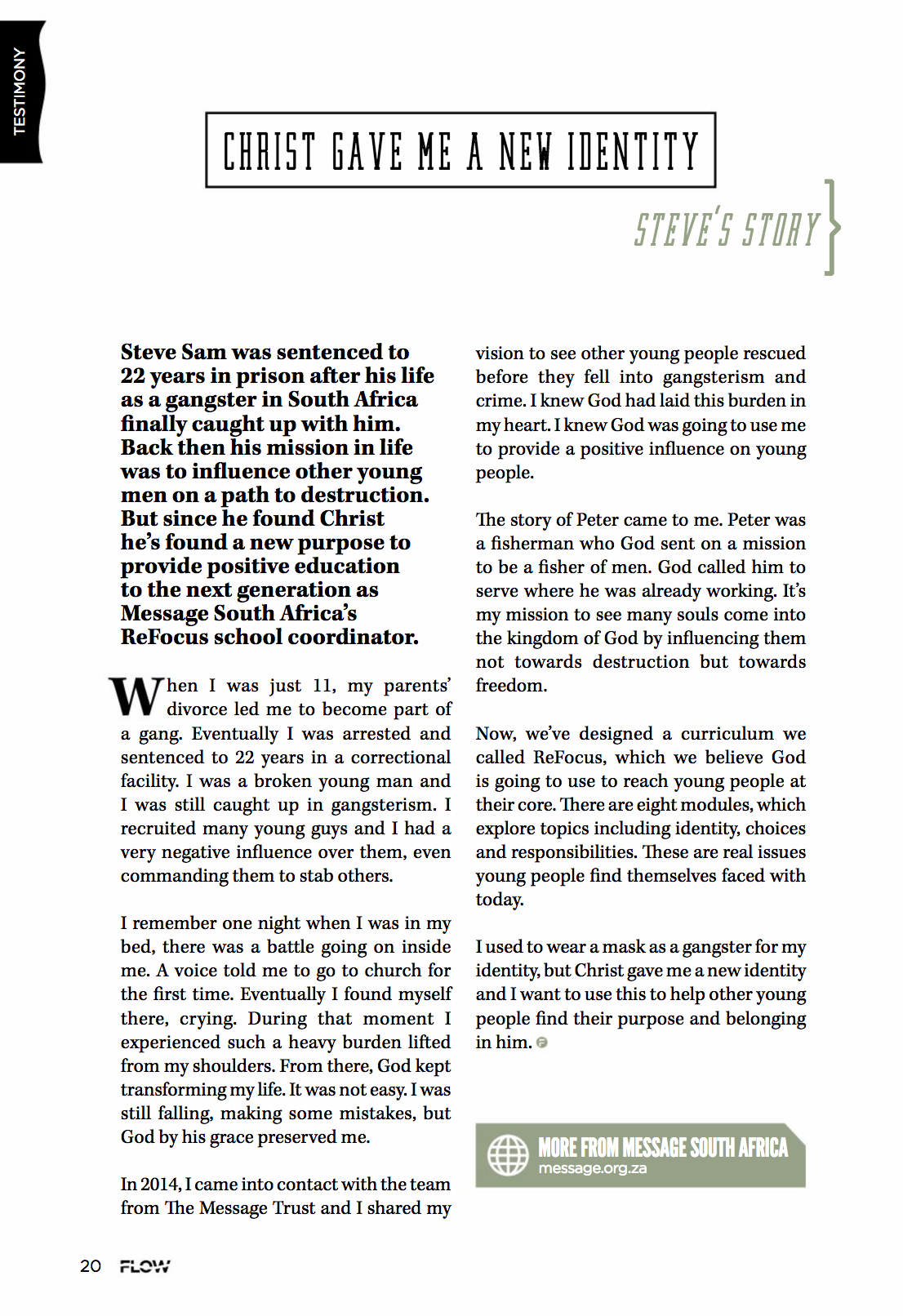